The Digital Repository is an extensive database of parliamentary documents which is divided into these 2 main parts:

The interface of the Digital Repository is only in the Czech language and the input is via the following image: 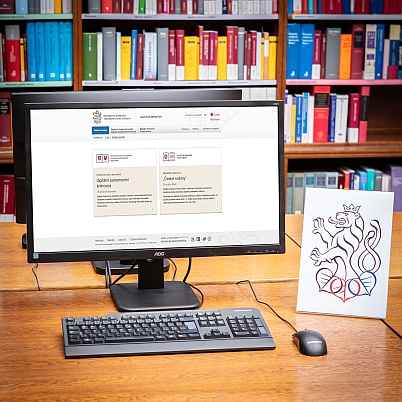 The objective of the project is to create and provide unified information system:

Another important goal is to bring information on present and past activities of the two parliaments to broad public and make access to parliamentary sources faster, easier and more effective for our MP’s and senators and last but not least to preserve „golden collection“ of parliamentary libraries and archives for the future.

According to the Agreement on cooperation in creation and providing Joint Czech and Slovak Digital Parliamentary Library of Parliament of the Czech Republic and National Council of the Slovak Republic from 3rd June 2002, the Library will contain full texts of parliamentary prints (bills including preambles, resolutions), debates (verbatim reports of all sessions and votings) and other parlamentaria since 1848 until now.

During 2003 Joint Czech and Slovak Digital Parliamentary Library will contain parliamentary texts of several hundred thousands of printed pages. They will be:

GOAL OF THE PROJECT

The basic goal of this project is to make all available resources related to the history of Bohemian assemblies accessible via the Internet. It will, however, take some time to complete. The project will be completed through the close cooperation with other libraries and archives within the country.

The final shape of the project will be in electronic form. Primary documents concerning the assembly, constitutional and state-law nature will be available in HTML format along with digital pictures. The following historical periods are covered:

The variety of historical documents released is the result of the fact that the nature of assemblies in Bohemian lands in former times was quite different from the modern era, during which synchronous stenographic minutes are taken. In the former periods only the results of the negotiations, resolutions and decisions were recorded. Not all of these have been preserved. The reason for the more general classification of documents is also due to the fact that in historical studies it is very hard to draw a line between the state history and the history of assemblies as such. Both constitute an integral part of the country’s past.

In the early period of the Bohemian state, decrees of counts made at assemblies of the nobility (e.g. Bretislav’s Decree of 1039) fulfilled the role of decisions made by modern assemblies. Even later on the rulers issued decrees, which had the same legal character as laws adopted by the parliament today. However, the assemblies did not approve these decrees at the time. Based on the separation of powers between the ruler and the aristocracy, and later the estates, in the past such decisions were in the exclusive authority of the ruler (e.g. Premysl Otakar II’s Privilege for the Rights of Jews of 1254, Kutna Hora Decree of 1409, but also Ferdinand II’s Restored Land Arrangement of 1627). Some documents were originally draughted by an assembly or leaders of the aristocracy, but are only known from royal edicts (e.g. John of Luxembourg’s Inauguration Diplomas of 1310 and 1311, Vladislas Jagellon’s Electoral Capitulation of 1471 and Ferdinand I’s Electoral Reverses of 1526 and 1545).

ARTICLES (RESOLUTIONS) OF THE BOHEMIAN ASSEMBLY IN THE MANUSCRIPTORIUM

The articles are accessible online not just as images but also they have transliterated full texts added.

All articles are freely available in the Manuscriptorium (a digital library of manuscripts and early printed books and also a virtual catalogue of historical book collections of Czech and European libraries).